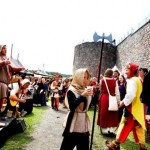 in KungÃ¤lv that celebrates that 10 years! There will not only a market where you can buy everything from newly baked bread to medieval products, shirts, swords and so on but also a tournament where brave knights fight each other to win while the King and Queen of this festival watches. There will be jesters peforming during the day and bands performing in the evening in one of the many old taverns that is set up for the festival. So don't miss the oppurtunity to take a step back in time walking around the fortress during that weekend!