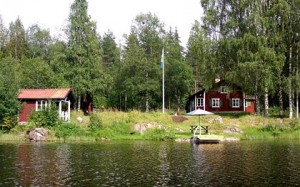 When the weather gets warm and nice and the summer is getting closer, the Swedes escape the cities for the countryside or the seaside. The summer house, or the "sommarstuga", is kind of a resort where a family goes to get away from the city and the stress to relax and have a nice time.

A summer house is a temporary accommodation used during the summer months, vacations and weekends. Many Swedish summer houses have been descended for generations and originally they were small farms, cottages or homesteads. Traditionally, it was a small house separated from the rest of the farm that was uninsulated and some of the inhabitants of the farm moved there during summer. During winter, on the other hand, the summer house was left unheated and was often used as storage space.

There is a public holiday coming up on Thursday, the Ascension of Christ, and I am sure the summer houses will be inhabited for the weekend by Sweidsh families from all over the country. My family will be one of them. Since summer is here real soon we will go there and open it up for summer. This means cleaning, painting and working in the garden. I bet our neighbours will be doing the exact same thing...