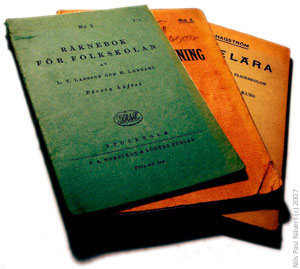 There are a couple of places in Gothenburg that I frequently visit. The public library at GÃ¶taplatsen is one such place. I go there for English conversation, to read and borrow books and magazines, to check their notice boards for what is happing in the city, I go there to borrow films and music, and I go there to study, alone or with friends. Sometimes I even go there to work on my short stories. It is an amazing place, home to knowledge, peace and quiet.

The librarians are exceptionally kind and knowledgeable, always keen to help out whatever the trouble. I have on several occasions requested the strangest of materials, including copies of old singing manuals dating back to the 17th century, and have never gone home empty-handed. Of course, the singing manuals in question had been republished, and they had to be borrowed on interlibrary loan from the Royal Library in Stockholm, but the fact remains that they were available. So if I ever have trouble finding something, I pay a visit to the public library.

Apart from helping visitors to the library find various texts and giving recommendations when asked, the librarians also organize several activities, such as language cafÃ©s. Misi.se is preparing an article on language cafÃ©s in Gothenburg, which will be published when we have received confirmation on the dates for the language cafÃ©s this semester.

Many people think of books when they think of libraries. But the public libraries in Sweden offer so much more. There are films (documentaries and fiction), music, some learning software like the Rosetta stone language courses, to mention just a few, all of which you may borrow free of charge. I am currently going through all the Hiyao Miyazaki films, most of which have been unavailable from many video rental shops that I have tried. In addition to everything you can borrow at the library, having a library card means you also have access to Naxos Music's online streaming library with thousands of pieces of music to listen to!


Getting a library card

Getting a library card in not difficult, and is certainly possible even if you are only here on a short term exchange program. All that is required is that you have a Swedish address that you will not vacate for at least three months. Library cards may be requested at any of the public libraries in Gothenburg and I think you get the card immediately, but maybe they will send it to your address.

This is a series of ten podcasts designed to introduce you to the Swedish language. We apologize for the poor audio quality of the first three episodes.
Episode 1 - Word order and verbs.
Episode 2 - Nouns.
Episode 3 - Adjectives.
Episode 4 - "What is that?"
Episode 5 - "Weekdays and Time"
Episode 6 - "Weekdays and Time"
Episode 7 - Verbs for 'to shop'
Episode 8 - "Money and withdrawing money from a store"
Episode 9 - Tag-Questions and Asking for Opinions
Episode 10 - Swedish Months and Saying Farewell